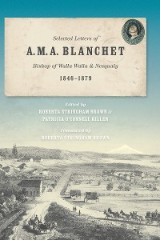 Selected Letters of A. M. A. Blanchet

In 1846, French Canadian-born A. M. A. Blanchet was named the first Catholic bishop of Walla Walla in the area soon to become Washington Territory. He arrived at Fort Walla Walla in late September 1847, part of the largest movement over the Oregon Trail to date. During the thirty-two years of Blanchet's tenure in the Northwest, the region underwent profound social and political change as the Hudson's Bay Company moved headquarters and many operations north following the Oregon Treaty, U.S. government and institutions were established, and Native American inhabitants dealt with displacement and discrimination. Blanchet chronicled both his own pastoral and administrative life and his observations on the world around him in a voluminous correspondence-almost nine hundred letters-to religious superiors and colleagues in Montreal, Paris, and Rome; funding organizations; other missionaries; and U.S. officials. This selection of Blanchet's letters provides a fascinating view of Washington Territory as seen through the eyes of an intelligent, devout, energetic, perceptive, and occasionally irascible cleric and administrator.Almost all of Blanchet's correspondence was in French. Roberta Stringham Brown and Patricia O'Connell Killen have chosen forty-five of those letters to translate and annotate, creating a history of early Washington that provides new insights into relationships, events, and personalities. A number of the letters provide first-hand glimpses of familiar events, such as the Whitman tragedy, the California gold rush, Indian wars and land displacement, transportation advances, and the domestic material culture of a frontier borderland. Others voice the hardships of historically underrepresented groups, including Native Americans, Metis, and French Canadians, and the experiences of ordinary people in growing population centers such as Seattle, Walla Walla, and Vancouver, Wash-ington. Still others describe the struggle to bring social, medical, and educational institutions to the region, a struggle in which women religious workers played a key role. The letters-and the editors' fascinating annotations-provide an engaging and insightful look at an important period in the history of the Pacific Northwest and southwest Canada.